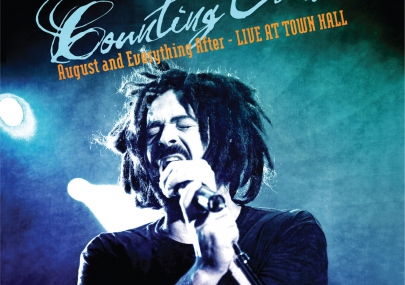 It started as a joke and became a show, the[mp3com-artist] Counting Crows[/mp3com-artist]' sold-out 2007 reading of their classic album, August and Everything After. Four years later, that magical night is available on CD and DVD for those of us who missed it live. "It was just a prank we were playing on the band," writes Adam Duritz in the liner notes of Counting Crows' August and Everything After: Live at Town Hall. "The film was supposed to (capture) a concert where we played with our friends, an evening at Town Hall with us, our songs and their songs." But the devilish side of the Crows' singer and guitarist David Immergluck got the best of them and they sprang a surprise playlist on the band at the last minute: a full-reading of August and Everything After from top to bottom. Little did they know that bassist Millard Powers and drummer Jim Bogios had never even played some of the songs in the set. But, it didn't matter: the show was on fire. Arrangements were made and a month later, with film crew in tow, the band stepped back onstage to take another unrehearsed and equally fiery run-through of the band's 1993 classic. "We've never played it since then," Duritz adds, "but that night...we caught it all on film." Today's Free MP3 of the Day really needs no further introduction. Get a free MP3 download of "Mr. Jones (Live)," courtesy of our friends at MP3.com