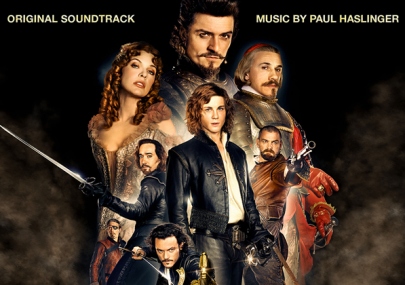 It's one of the greatest adventure stories every told, which is why storytellers keep telling it. A new version of The Three Musketeers is in theaters now and [mp3com-artist]Paul Haslinger[/mp3com-artist] has a great new piece of music as part of the soundtrack. Austrian born and trained, Paul Haslinger joined venerable German electronic music group [mp3com-artist]Tangerine Dream[/mp3com-artist] while still in his mid-20's. Over the course of five years with the group, he participated in the recording of 15 albums, ventured with the band on 4 world tours and contributed to a number of soundtracks, including Miracle Mile and Near Dark. Moving to LA in '92, Haslinger set up his own shop and recorded three solo records before teaming with well-known film composer Graeme Revell in 1998. Earning his first solo credit in 2000 (with HBO's Cheaters) and the first placement of his solo music in a major motion picture (in Steven Spielberg's Minority Report) thrust Haslinger onto the A-list of Hollywood composers. Since that time, Haslinger has worked on countless films, contributed music to computer games and collaborated with several dozen artists, including [mp3com-artist]Nona Hendryx[/mp3com-artist], Robert Rich and Joey Waronker. "Gripping" and "electrifying" are the words that come to mind as we listen to the pulsing staccato of this 2 minute soundtrack segment from the newest telling of The Three Musketeers. Get the free MP3 download of "Only Four Men by Paul Haslinger, from the new Three Musketeers movie soundtrack, courtesy of MP3.com!

The Best Movie Soundtracks of the ’90s, Ranked

These are the 10 Best Movie and TV Soundtracks of 1990