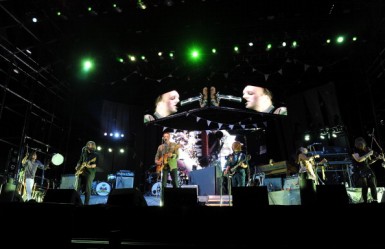 While San Francisco's Outside Lands Festival hosts a huge range of music this year--from folk and funk to hip-hop and electronic--it features has a particularly strong lineup of indie-rock bands. We've picked out some key highlights below--and some free downloads! To rock fans around the world, many of these bands--like Sunday night headliners [mp3com-artist]Arcade Fire[/mp3com-artist] and Friday highlight [mp3com-artist]MGMT[/mp3com-artist]--need little or no introduction. Others, however, such as [mp3com-artist]Best Coast[/mp3com-artist] and [mp3com-artist]Beruit[/mp3com-artist], aren't exactly household names yet. But they are every bit worth your time. [caption id="attachment_70876" align="aligncenter" width="385" caption="Bethany Cosentino of Best Coast (Photo by Frazer Harrison/Getty Images)"]

[/caption] The Canadian band [mp3com-artist]Arcade Fire[/mp3com-artist] has, in a little under a decade, gone from being an indie darling to one of the biggest headliner bands around (not to mention a GRAMMY winner). Playing at everything from Coachella in California to Popoganda in Stockholm, the group's rousing, grandiose rock is everywhere these days--and rightly so. With three incredible rock albums under their belts--2004's Funeral, considered by many critics to be the top indie album of the last decade; 2008's Neon Bible; and, of course, last year's Album Of The Year The Suburbs--Arcade Fire now has a huge range of great songs to choose from, and their live sets never disappoint. http://www.youtube.com/watch?v=UGKL4YLynaU Some people might question the inclusion of [mp3com-artist]MGMT [/mp3com-artist]on this list, as their debut album Oracular Spectacular was electronic. Their sophomore release however, 2010's Congratulations, was an awesome rock record. By not caving into expectations, MGMT has truly legitimized itself as a creative force. http://www.youtube.com/watch?v=cB7IAXrCkO8 World-traveling troubadour Zack Condon and his band [mp3com-artist]Beruit [/mp3com-artist]have released some of the most original indie rock of the past decade. Condon's debut album Gulag Orkestar was inspired from the music he encountered during his travels in Eastern Europe--a mixture of Neutral Milk Hotel and Balkan folk music. It was made all the more impressive by the fact he was only 19 when it was released. While other kids were messing around with keyboards, Condon sounded like the wise old man who has seen it all. His subsequent releases have been inspired by other travels to France, Mexico and Brazil. With a singular blend of musical styles, Beruit's show is sure to be one of the most unique of Outside Lands. http://www.youtube.com/watch?v=kQ4qXMzpH-Y The song's off [mp3com-artist]Best Coast[/mp3com-artist]'s debut album Crazy For You are also inspired by setting--specifically, summer in California. the songs (by chief vocalist and songwriter Bethany Cosentino) give nod to the Beach Boys but are fully 21st century. With her beautiful voice and strong sense of melody, Cosentino's pop is perfectly suited to the atmosphere at Outside Lands. http://www.youtube.com/watch?v=_fjMYI33E8Q All week, MP3.com shines a Spotlight on Outside Lands. The music, food, wine, and arts festival takes place August 12th – 14th at the Golden Gate Park in San Francisco, CA. [caption id="attachment_70877" align="aligncenter" width="385" caption="Beirut (photo courtesy WXRT)"]

[/caption] Buy your tickets here before they sell out…single day tickets for Friday and Saturday are gone, and 3-day tickets are disappearing fast! For further coverage of Outside Lands 2011, including interviews, live footage, photos, and more, stay tuned to our friends at Live 105 in San Francisco.