Spotlight on Lollapalooza: Indie Pop Band Noah And The Whale Among The 2011 First Timers 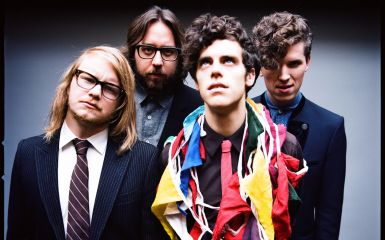 Lollapalooza has put together one of their strongest lineups ever for 2011, with many of their top level acts appearing at the festival for the first time. Lollapalooza [pullquote quote="All week, MP3.com shines a Spotlight on Lollapalooza. The 20th anniversary festival takes place this weekend in Chicago's Grant Park."]has come a long way since its inception in 1991 as a farewell concert for [mp3com-artist]Jane's Addiction[/mp3com-artist]. This year's festival goes way beyond the simple rock show format, showcasing acts from a wide variety of musical genres.  It's telling that two of the festival's biggest artists - [mp3com-artist]Eminem [/mp3com-artist]and [mp3com-artist]Deadmau5 [/mp3com-artist]- are hip-hop and electronic artists. [caption id="attachment_70613" align="aligncenter" width="385" caption="(Photo By Kevin Winter/Getty Images)"]

For full coverage of Lollapalooza 2011, including interviews, live sessions, reviews, and photos, stayed tuned to our friends at WXRT in Chicago.

[/caption] With the huge stages and even bigger audience sections, Grant Park presents a unique opportunity for bands to experiment with their live show. The surrounding environment, with the city of Chicago on one side and Lake Michigan on the other, gives the space a special feel. By using the the environment to their advantage, bands can create one of a kind performances. It will be interesting to see what happens when exciting and creative artists like [mp3com-artist]Foo Fighters[/mp3com-artist], [mp3com-artist]Eminem [/mp3com-artist]and [mp3com-artist]Noah & the Whale[/mp3com-artist] all get their shot at a Lollapalooza show. For a preview of what's to come at Lollapalooza 2011, check out "Life Is Life (Yuksek Remix)" by [mp3com-artist]Noah & the Whale [/mp3com-artist] track. [mp3com-download url="http://files.radio.com/downloads/time-based/noah.mp3 " artist="Noah & the Whale" song="Life Is Life (Yuksek Remix)" expiration="12/31/2011" email="none" year="2011" label="Verigo"/] Hailing from the UK, [mp3com-artist]Noah & the Whale[/mp3com-artist] are one of the international bands that will be appearing at this year's Lolla.  Their beautiful blend of indie pop and English folk music have gained them a lot of attention in recent years.  "Life Is Life" is a single off of their third album Last Night on Earth, which has been turning heads on this side of the Atlantic as well - as evidenced by their upcoming Lolla appearance. White hot French DJ [mp3com-artist]Yuksek [/mp3com-artist]gives the track the proper French Touch treatment, cranking things up a bit to turn "Life Is Life" into a great dance track. While you're at it, check out the video for "Life Is Life" as well: [youtube=http://www.youtube.com/watch?v=6HKdXbTI49U] All week, MP3.com shines a Spotlight on Lollapalooza. The 20th anniversary festival takes place this weekend in Chicago's Grant Park. For full coverage of Lollapalooza 2011, including interviews, live sessions, reviews, and photos, stayed tuned to our friends at WXRT in Chicago.