Outside Lands Spotlight: Electronica Line Up 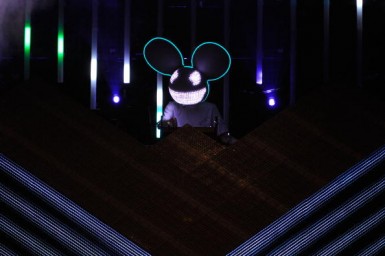 This year's Outside Lands Music and Arts Festival features a wide array of music across numerous genres. Today we'll take a look at the electronic artists who will be performing during the three-day event. After a long day of hot rock shows, dark, cool late night electronic shows can be the perfect way to wrap up a day at a music festival. This year, Outside Lands has a number of well know electronic artists performing, including [mp3com-artist]Deadmau5[/mp3com-artist], [mp3com-artist]Major Lazer[/mp3com-artist] and [mp3com-artist]Miguel Migs[/mp3com-artist]. Get a free MP3 of the Deadmau5 song "I Said (Michael Woods Remix")!  Performing on Sunday evening, [mp3com-artist]Deadmau5 [/mp3com-artist]is perhaps the most well known of the electronic artists playing at OL. Over the past five years he has experienced a unequaled rise to fame, becoming one of the top North American DJs in the world. His most recent album 4x4=12 has been a huge success both commercially and critically.  It went Gold status in Deadmau5's native Canada and won him the Beatport Music awards of Best Electro House Artist, Best Progressive House Artist, and "most influential, relevant and forward-thinking person in electronic music over the past 12 months." [caption id="attachment_70772" align="aligncenter" width="385" caption="Deadmau5 backstage at Lollapalooza (photo: White Menace)"]

[/caption] Also performing on Sunday is [mp3com-artist]Major Lazer[/mp3com-artist], the Jamaican dancehall project started by producers [mp3com-artist]Diplo [/mp3com-artist]and [mp3com-artist]Switch[/mp3com-artist]. Diplo is known for his eclectic productions, which incorporate influences from disparate musical genres like baile funk, miami bass and southern hip hop. His forward thinking tracks have been used by artists like M.I.A., Bonde do Role and many others. Diplo's own record label, Mad Decent, has become a champion for like minded artists who bridge gaps between different types of music. Switch is a widely respected UK producer and the founder of the label Dubsided.  He has produced tracks for artists such as Beyoncé, Santigold, Amanda Blank, Nicola Roberts and Christina Aguilera. [caption id="attachment_70775" align="aligncenter" width="405" caption="Diplo"]

[/caption] The artist [mp3com-artist]Miguel Migs [/mp3com-artist]has been involved in house music since the mid-'90s, steadily releasing classic styled house tracks for over 15 years and starting his own label in the process.  Equally adept at doing studio production work with high profile artists and mixing it up in dark underground clubs, Migs knows his music inside and out and knows how to get a crowd going. For now, back to what we do best: free music. From today onward, download songs from OK Go, Deadmau5, Best Coastand more below. We’ve also got a few tracks that will ONLY be available for 24 hours. Dates for these free MP3s are below, so mark ‘em on your calendars to enjoy as much free Outside Lands music as possible.

STS9, “When The Dust Settles”