Coltrane Motion, “I Forgot There Was A War On” 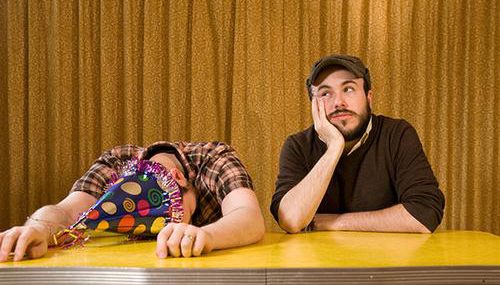 Judging from their name, you'd expect [mp3com-artist]Coltrane Motion[/mp3com-artist] to sound like a combination of[mp3com-artist] Albert Ayler[/mp3com-artist] and [mp3com-artist]Dizzee Rascal[/mp3com-artist]. But there's no sign of A Love Supreme in their song "I Forgot There Was A War On," though it certainly has a bit Dizzee's grimey groove. Coltrane Motion are the Chicago-based duo of Michael Bond, a 60's-obsessed electronic popster, and reverb-loving guitarist Matt Dennewitz, who slathers the band's live shows with walls of wailing distortion over throbbing drum loops and synthesizers draped in squirrel fuzz and bullwinkle magic tricks. The group started their odyssey with a handful of lo-fi CD-R and compilation releases that came to a head with their debut, Songs About Music. Following tours described as something akin to an "exuberant seizure," the Coltrane brothers returned to Bond's bedroom studio to record the 2009 7" The Year Without A Summer and 2010 long player, Hello Ambition!. If you're familiar with the [mp3com-artist]Jacob Fred Jazz Odyssey[/mp3com-artist], the soundtrack to the adventures of Frostbite Falls and enjoy the idea of dancing semi-naked to [mp3com-artist]Talking Heads[/mp3com-artist]' Remain In Light (with or without the shades drawn), then you already know you like Coltrane Motion. [mp3com-download url="http://freedownloads.last.fm/download/408911162/I%2BForgot%2BThere%2BWas%2BA%2BWar%2BOn.mp3" artist="Coltrane Motion" song="I Forgot There Was A War On" expiration="02/29/2012" email="none" year="2010" label="Datawaslost"/]

Smoking Popes, “Angel Flying Too Close To The Ground”